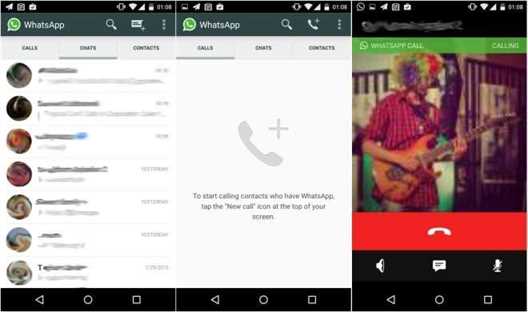 WhatsApp has now rolled out the voice calling feature for its Android users in India.

Finally WhatsApp rolled out its WhatsApp Calling features for all the Android users in India. This can be downloaded either from Playstore: version 2.11.528 or from the WhatsApp website: version 2.11.531 or even it can be activated if users get an “invite” by receiving call from some other user who has already activated the voice calling feature.

Now user can directly get the voice calling feature if you get an “invite” as mentioned above. Once an invite is received user receives the call and user would need to close and reopen the app. Soon the WhatsApp Calling feature gets updated in WhatsApp and now user will be able to see 3 tabs on the WhatsApp homescreen instead of the most recent chats. The 3 tabs are namely Calls, Chats and Contacts. The call tab shows incoming, outgoing and missed calls at the precise times and is pretty much similar to a smartphone’s contact directory and it also keeps a record of recent WhatsApp calls.

One of our user Prachi Soni send us this screen shot to let us know that she got a calling feature on her Moto G and she also said that she invite more than 20 of her friends for this feature and all of them easily getting the calling feature.

Last week we reported a WhatsApp malware which was promising an access to the voice calling feature ofWhatsApp and if users clicked on the link it would take them to some survey wherein userswere forced to download applications which might contain dangerousmalwares. So just a word of caution to all users would be to download the feature only from thePlaystore orWhatsapp website.The “invite” window will remain open for a longer time this time unlike during its Beta testing when the window was kept open for only few hours. So users can take their own time get the feature downloaded in their device.
Whatsapp
Previous ArticleSony PlayStation User Accounts are Getting Hacked, Change Your PasswordNext ArticleHere’s What You Can and Can’t Post on Facebook, Updated Community Standards