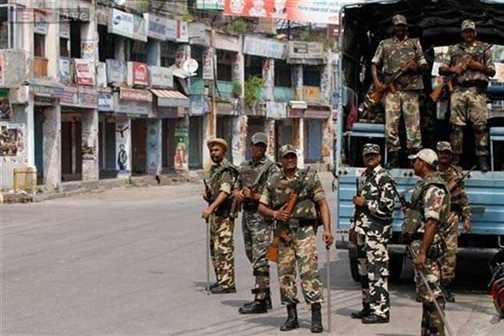 Violent clashes on Saturday broke out between two communities over a land dispute here with the two sides indulging in brick batting and arson, leaving some persons injured and prompting authorities to impose curfew in the district.

Tension prevailed in the district and additional forces have been rushed to bring the situation under control.

“As per the information received so far there was a dispute over land between two communities which escalated this morning,” Additional Director General of Police (Law and Order) Mukul Goel told PTI.

He said curfew has been clamped following the clashes.

The dispute escalated when members of one community started construction work at the site in Kutubsher area in the wee hours Saturday morning, leading to violent clashes.

Both the sides indulged in heavy brick batting, arson and opened fire and there were reports of several shops being gutted in the clash, police said.

In a bid to control the situation, police used force and fired rubber bullets.

Heavy force, including police, PAC, RAF has been deployed in the area and paramilitary forces have also been called.

“Injuries have been reported, but there is no report of any casualty so far,” the ADG said.

Even as curfew has been clamped, sporadic incidents of clashes were reported and tension prevails.

The ADG said senior officers were camping in the area.

District officials said curfew has been clamped in Saharanpur city. Over two dozen shops and vehicles were gutted.

DIG Saharanpur N Ravindra told HT that there was a long standing dispute between a gurudwara and a mosque standing side by side. There is a piece of land between the two places of worship, he said. A litigation was filed in the local court, he added.

On Saturday, members of one community began construction of a boundary wall around the land and members from the other community opposed the construction. The brawl began with a verbal spat which led to the two groups hurling stones at each other.

Police reached the spot and brought the mob under control.

Due to curfew the route for the ongoing ‘Kanwar Yatra’ has been diverted.