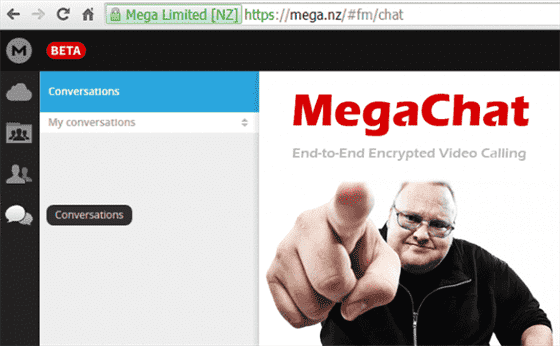 Are you worried about your privacy? Its Obvious because of a Hacker or the government could be snooping in your emails, voice or video calls.
The Famous Internet entrepreneur Kim Dotcom, who introduced legendary Megaupload and Mega file sharing services to the World, has now released its latest encrypted communication software for video calling, messaging and chat.
Kim Doctom’s file-sharing site Mega has launched the public beta of its end-to-end encrypted video and audio chat service called “MegaChat”, which the company says gives better protection than alternatives such as Skype and Google Hangouts.
MegaChat is currently free to use and right now just provides browser-based audio and video calls, but Mr. Dotcom said on Twitter “Text chat and video conferencing will follow soon,”
HOW TO USE MEGACHAT
According to the company, MegaChat would allow you to communicate with anyone over the Internet via audio or video through your web browser, without giving anybody the ability to snoop on your messages in between.
The release of MegaChat comes almost three years after armed police raided Dotcom’s Auckland mansion and took down his Megaupload website. Since then Dotcom, who’s fought extradition from New Zealand to the U.S. on copyright infringement charges, become involved in politics and launched Mega, a website that offers encrypted Internet communication and storage.
Mega describes itself as ‘The Privacy Company‘, and but its security prowess is bound to be tested over the coming months. So now forget to download Skype software and try this new end-to-end encrypted instant messenger for video chat.
Privacy
Previous ArticleFinally Moto G Users in India get lolipop Update this MorningNext ArticleGoogle Apps Flaw Allowed Hacker to Hijack Account and Disable Two-factor Authentication