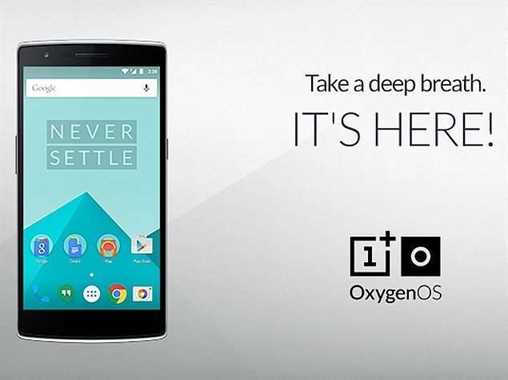 OnePlus has finally released its own custom ROM – the OxygenOS – for OnePlus One users. Those interested in flashing the new OS can download the update from OnePlus’s microsite.

The initial version of Oxygen OS looks to be very close to stock Android, both aesthetically and from a functionality point of view. However, there are a number of features that the OnePlus team added in order to enhance the user experience.

Oxygen OS carries over gesture support, first available on Oppo’s Color OS and adopted on Cyanogen OS 11s. You can draw various gestures on the screen of the OnePlus One (even with the screen turned off) and quickly launch apps like the flashlight or camera.

Another feature is the improved quick settings, which lets you reorder settings tiles and choose the ones you want to see. This feature seems to be inspired by Paranoid Android, and that should be no surprise, given that many of the key people behind PA are now contributing to Oxygen OS.

Oxygen OS also comes with a file manager, a welcome addition for any power user, as well as the ability to customize lockscreen wallpapers and switch between capacitive and on-screen navigation keys.

The OxygenOS is based on the Android 5.0.2 Lollipop OS and OnePlus claims that it is light and has subtle features. Some of the common features include Gestures which includes double tapping to wake up the phone, music controls, shortcuts for camera and flashlight; Customisation features includes customising the wallpapers, ability to switch between hardware and software navigations and so on; Quick Settings lets you rearrange tiles in the notification tray and so on.

You can also find detailed instructions on how to flash the new OS to your OnePlus One here.

To get feedback from users, OnePlus has also included a Feedback app where users can directly post their feedback for the ROM team.

The new operating system from OnePlus, based on Android 5.0.2 OxygenOS is light and essential with subtle, useful features. This is just a beginning; a platform on which we will build, together.

Several original OnePlus features have been built right into OxygenOS, including screen-off gestures like double-tap to wake, music controls, and shortcuts for the camera and flashlight.

With customizable lockscreen wallpapers and the ability to switch between hardware and software navigation keys, OxygenOS allows you to make your phone distinctly yours.

With our new quick settings feature, tiles can be added, removed, and re-organized with the click of a button, and it blends beautifully right into the notification tray’s UI. It just makes sense.

To make sure we’re heading in the right direction, we need your input. This feedback app allows you to submit your comments directly to our ROM team. We encourage you to use it; we can build a better OS together.

You’ll need to enable installations from unknown sources (Settings > Security) in order to install the feedback app on OxygenOS.