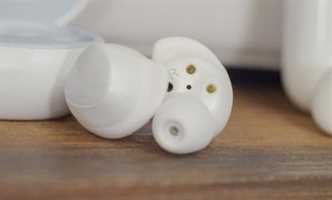 Samsung recently brought there a new true wireless headphones out in the market- Samsung Galaxy Buds. After the immense success of Apple AirPods, every company is trying to bring such magnificent pieces in the market.

Samsung is one of them who has been trying for it since a long time now. But, this time they have brought something incredible. The new Samsung Galaxy Buds are tuned by AKG, carries wireless charging support and have many more cool amazing features. But, does it stand a chance against Apple AirPods?  Let’s check it out in the Samsung Galaxy Buds review below:

The new Samsung Galaxy Buds have a nice premium build which can be felt and seen from the first time you see or hold them. The design is slick and the company makes them true wireless- No wire in between them. So, there’s no irritating cable between them which annoys you a lot of time and act as a pain. The new Samsung Galaxy Buds are really small- at least smaller than the last generation IconX. These pieces are 30% smaller than the last one. Just try ordering online without any delivery cost to you by using available Snapdeal Coupons today.

The build is premium and solid and the same goes for when they go in ears. They are grippy and comfortable to ears. They are not slippery or there is no fear of falling off them. The rubber buds in the earpieces are really good and hold the ear. The buds are light, so there is a minimal chance that the long stay in your ears will hurt you. But, if you are in the middle of some core exercise, there are chances that they might feel daunting or get unstable.

Samsung Galaxy Buds use a nice and intelligent way to soak the external sounds or noises. It will further give you a nice user experience in listening to songs. The company has used microphone within the buds to soak the external noise down. It is really a great job done by the company to integrate it into such small pieces.

The treble is crystal clear and clear while listening songs- mostly in classic hits or classical musical you get everything clear. If you are the one who doesn’t like bass much, then this set might suit your ears. The Samsung Galaxy Buds aren’t those which fill you with bass. Bass is not the USP of this piece, clarity is. So, these earphones might go totally in a different direction in a certain genre of music.

Samsung Galaxy Buds can be easily charged as there is wireless charging feature. Just like AirPods, you can charge these in the case itself. The device can also get charged by the Qi wireless pad.  The earphones house a 58mAh battery. At a single go, they can provide you 6 hours of music as per the company. The cradle of the earbuds can fuel themselves up to 252mAh.

You can also pair this set with multiple devices at one time- so you can easily switch mobiles and turn on your listening or video watching stuff. The earphones have various sensors like Accelerometer, Proximity, Hall and Touch sensor. You can easily connect this device with Samsung or any other Android device using Android 5.0 or higher. Samsung Galaxy Earbudsuse Bluetooth 5.0 as the connectivity option and uses AAC, SBC audio codecs in the earbuds. You can also find some of the similar gadgets with better rates by using available AliExpress Promo Codes today.

Unlike the last attempts of the Samsung, the new Samsung Galaxy Buds seem to pitch perfectly in front of its customers. They are lighter, smaller, portable and most importantly, comfortable to ears. The audio quality is not as impressive as Apple Airpods but it is a huge improvement from its last IconXmodels. The large cradle is one thing which is not likable too. Anyways, if you are looking for true wireless headphones, this is not the one to beat Apple AirPods. But, particularly with Samsung devices, the Galaxy Earbuds does wonder.

Previous ArticleWhat are the MOST Critical Web Vulnerabilities in 2019?Next ArticleDeepSound – Audio Steganography Tool