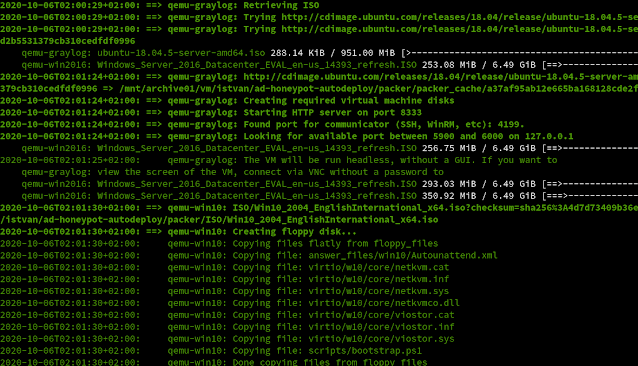 Runs on self-hosted virtualization using libvirt
with QEMU/KVM (but it can be customized easily for cloud-based solutions).

Used for painlessly set up a small Windows Domain from scratch
automatically (without user interaction) for the purpose of RDP Honeypot
testing.

Features a Domain Controller, a Desktop Computer and a configured
Graylog server for logging the actions of the bad guys.

After going through the Packer+Terraform+Ansible pipeline,
the configured Windows Domain should be up and running, you could
attach the RDP service of the Desktop to the public internet, and
let’s monitor the events through the Graylog.

Features of the running system are:

Virtualization needs some power of your host system:

Before starting with Packer, set up the intial passwords:

Windows Server 2016 and Ubuntu installation media should be downloaded
by the Packer script. VirtIO needs to be downloaded by the attached
get-virtio.sh script:

Windows 10 should be downloaded manually by getting a temporary
download link and save it to the ISO folder. The download link
could be obtained from here. Select the English (International), 64-bit version and
save the ISO to ISO/Win10_2004_EnglishInternational_x64.iso.

For mapping IP locations on a World Map in Graylog, the MaxMind GeoIP
database is needed. Unfortunately due to licensing terms it cannot
be redistributed, so you have to download it manually (after registering)
from the MaxMind site. The free GeoLite2 version should work, get the “GeoLite2 City” Database in MMDB format (download the GZIP and untar)
and put it at resources/GeoLite2-City.mmdb.

If you do not have Packer, get the latest version from the packer.io site
(download the pre-compiled binary)
or try to add the Hashicorp repository to your packaging system (useful for Terrafrom also).

If you are rebuilding the images, do not forget to clean up previous
builds:

If you want to re-download the images, remove packer_cache:

After these preparing steps, run the Packer builds in parallel:

The images should be ready in a reasonable time (~20-30 mins depending
on your host hardware power).

Now the infrastructure can be deployed using Terraform.

Terraform provider for libvirt
is also needed, get the appropriate binary from the github
releases page, and also look for Terraform v13 migration notes for proper
installation.

Initialize the working directory (only needed for first time use):

Build and launch the infrastructure (“apply the changes”): 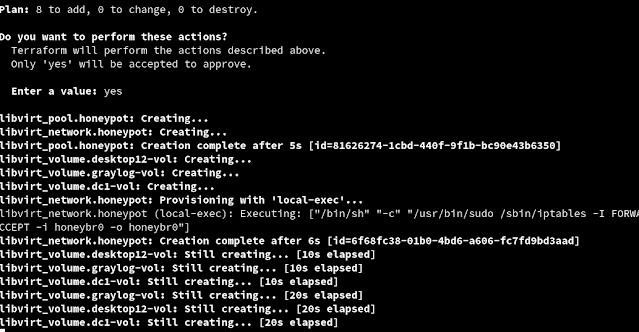 After a short time (~2-3 mins),
the network and virtual machines are up and running.

WARNING: You should take care of protecting your private
network. The terraform config (main.tf) provided here just contains
a custom firewall rule for my own testing environment
(blocking 192.168.0.0/16 destination traffic from the
192.168.3.0/24 honeypot network).

Next is the configuration phase.

Get into the ansible folder:

Recommended installation method is installing the latest Ansible
with some required additional dependencies in a Python venv virtualized
environment:

For later use just activate the venv by

And just deactivate if it is not needed anymore in your
current session.

You should put an SSH public key with filename id.pub into the ansible
folder for accessing the Ubuntu Graylog machine with the ubuntu user
(ansible will add it to ~ubuntu/.ssh/authorized_keys).

The wordlist.txt file contains some (intentionally weak) passwords
for the populated domain users which can be customized. 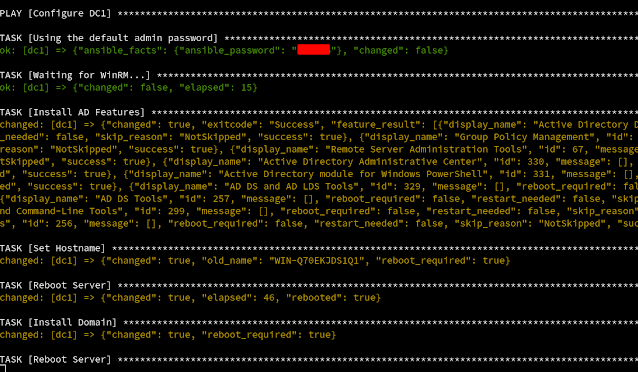 After 20-25 mins everything is ready.

According to the libvirt network configuration (NAT), the hosts can access
the public internet (if your host system allows it).

Accessing the hosts is possible through the host system.
Practically using an SSH socks tunnel and proxychains for RDP or WinRM
access is very comfortable.

And access the Windows 10 desktop (using an appropriate /etc/proxychains.conf
configured for the :5000 tunnel):

Or, access the Graylog web interface listening on :9000 locally on
the Graylog Ubuntu server by SSH ProxyJump and custom forward tunnel:

Then open URL http://localhost:9000 and you reach the Graylog web
interface.

For activating the RDP honeypot, just allow public access
to 192.168.3.112:3389 (for example with some port forwarding
configuration on your router and iptables rules on the host
machine; my helper script is rdp_public.sh)
and keep watching the Graylog. 😉