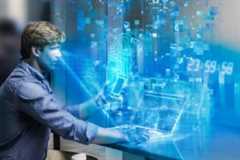 Social engineering attacks are not becoming common against corporate organizations and SMBs but are also getting increasingly advanced.

With hackers adopting smarter methods for trapping employees and individuals into giving up their valuable data, enterprises must use considerable efforts to stay two steps forward of the cybercriminals. These attacks usually involve some psychological manipulation to fool people into handling their confidential information.

A study conducted by the UK’s Federation of Small Business in 2016 reveals that social engineering is targeting small businesses to a great extent. The report highlighted that small firms are attacked seven million times every year, costing the UK economy approximately £5.26 billion.

The unprecedented rise of social engineering attacks has left several organizations in shame in front of their clients and competitors. As regarded, one of the fastest-growing threats to business, attackers are using advanced social engineering attacks to deceive and trouble the most intelligent and smart users into providing their valuable data like login credentials or other financial information like bank account or credit card numbers.

The average cost of a single data breach in 2020 will go beyond $150 million. According to Juniper Research, cybercrimes cost the business more than $2 trillion during the last year.

Social engineering attacks lead to a type of insider threat known as user error. The most common user errors occur when an individual unintentionally clicks on a malicious link present in an email or in a text message, which results in an account being compromised. This is particularly damaging when the links pertain to financial accounts with millions of customers, such as bank accounts, investment apps, and popular FX currency brokers.

However, it can also be a result of a person who leaves a laptop unattended that results in data theft. This point highlights that insider threats do not always have to be malicious, coming from a discontented employee who is looking to steal a company’s information right from under the nose of execs.

The purpose of phishing attacks can vary; often, they aim to steal money, but more commonly, they attempt to steal credentials or data that are more valuable assets in most cases. Verizon Data Breach Investigation Report of 2018 says 70% of breaches related to a nation-state or state-affiliated actors involved a phishing attack.

Apart from email phishing, spear phishing, vishing, and quid pro quo attacks are all common ways by which cybercriminals gain insider access into an organization’s net. The Symantec Internet Security Threat Report 2018 states, 71.4% of targeted attacks include the use of spear-phishing emails.

To further benefit our readers in this regard, we’ve compiled this article for them which will answer all their queries.

How is Social Engineering Altering the Insider Threats?

As mentioned earlier, the most common way through which attackers intrude an enterprise is email phishing. Although it depends on a couple of key components such as:

While looking at a social engineering attack that targets credentials and other official documents, it sheds light on two different types of insider threats. The first is when irresponsible employees click on a phishing link and expose the organization’s network to malware, which the attacker will later use to access the system. A recent example of this is the cyber-attack in New Orleans. A phishing attack leads to an announcement of a state of emergency, and the city has to close its entire network to investigate.

On the contrary, if the attacker is targeting to steal credentials, the user might be redirected to a convincing but fake website that’s pretending as a site they usually use, which will ask them to enter their identifications for that site.

Compromised accounts that use legitimate credentials are generally associated with advanced attacks like espionage. This creates problems for the organizations because they can’t be detected through the traditional security measures and can also cause a bit of damage too. In this situation, it is imperative to adopt various preventative practices to prevent loss.

How to Prevent Social Engineering Attacks?

Social engineering is different from other types of attacks because of its reliance on the human element for success; thus, the methods of prevention must be taken into account. The following mentioned below are some of the ways by which organizations can prevent such attacks.

It is best done by using specialized anti-phishing software. Several options do exist in the market with each offering their own unique set of capabilities like detecting spear-phishing emails, handling zero-day vulnerabilities, recognizing and neutralizing malware attachments, identifying man-in-the-middle attacks, solutions that specialize for managing cloud-based email communication vs. ones that can be installed with on-premise mail servers working behind the firewalls. This software is specifically designed to avoid doubtful emails from reaching the target user email.

Email communication by using public networks is not encrypted. Hackers use this restriction to snort out important information like account username and passwords, financial details, and even saved passwords too. It’s well established that virtual private networks (VPNs) are a mandatory application for anyone using public WiFi networks (that is, anyone who wishes to protect their personal information). However, not all VPN services are created equal. A recent report by Canadian security researcher Ludovid Rembert found that 29 out of the top 36 VPN services used by Canadians leaked some kind of personal information to the cloud.

Before COVID-19, a VPN seemed like an overly-paranoid solution. But now, as many people work from home, it’s easy for rogue hackers to set up free hotspots and trap users into giving their sensitive information without advanced data sniffing technologies. The best practice to prevent phishing over the free networks is to use your mobile hotspot and tethering capabilities to work with their 3G/4G data connection rather than depending on open systems.

Awareness and knowledge can help in safeguarding against the most sophisticated attacks. Outlining the structure of a typical spear-phishing attack and sketching out the dangers and risks of falling victims can make the users more alert and watchful in dealing with emails, including links and calls to action.

Besides user education, employees must also be educated in this cause. Companies must conduct seminars and workshops on phishing, where all staff members must participate and learn how to detect these attacks.

4.   Invest in the Right Technology

Spear phishing involves attackers using email, file sharing, and internet streaming providers used by the victim to collect information, which leads to a targeted attack. Successfully combating these attacks requires monitoring all these activities and mainly in real-time.

For this reason, users must invest in the right technology that is purpose-built for such multi-dimensional threat detection and management situations. It dramatically differs from antivirus software or other protection against malware tools that look at isolated instances of attack.

The SSL technology ensures encrypted and safe transmission of data over the internet. If you click on an email link and land on a site, then always verify the SSL credentials. A useful technique to avoid phishing is to give out information on the sites that do not have a valid SSL certificate installed.

Start using firewalls because they act as a buffer between you, your system, and outside intruders. Use two different kinds of firewalls .i.e, a desktop firewall, and a network firewall. The first option is a kind of software, while the second option is a kind of hardware. When used in conjunction with good antivirus software, they severely reduce the odds of hackers and phishers penetrating your computer or network.

Towards the end of the article, all it can be said that most of the organizations still don’t have a strategy to monitor employee behavior as a way of preventing social engineering attacks. It is vital that in an era where these attacks are so prevalent, companies utilize technical solutions as well as security awareness programs to increase the chances of detecting and combating such attacks at their core.