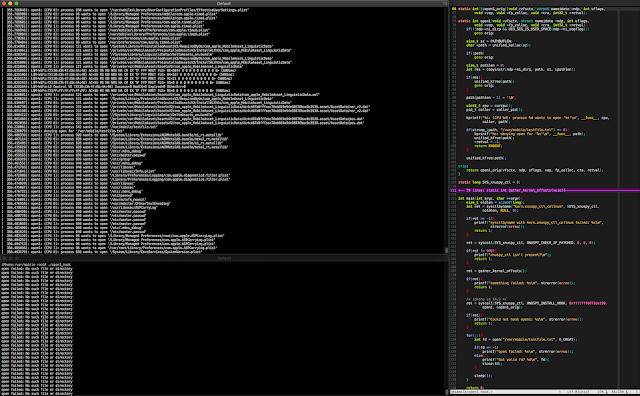 Output from the kernel log after compiling and running example/open1_hook.c

xnuspy is a pongoOS module which installs a new system call, xnuspy_ctl, allowing you to hook kernel functions from userspace. It supports iOS 13.x and 14.x on checkra1n 0.12.2 and up. 4K devices are not supported.

Run make in the top level directory. It’ll build the loader and the module. If you want debug output from xnuspy to the kernel log, run XNUSPY_DEBUG=1 make.

After you’ve built everything, have checkra1n boot your device to a pongo shell: /Applications/checkra1n.app/Contents/MacOS/checkra1n -p

In the same directory you built the loader and the module, do loader/loader module/xnuspy. After doing that, xnuspy will do its thing and in a few seconds your device will boot. loader will wait a couple more seconds after issuing xnuspy-getkernelv in case SEPROM needs to be exploited.

Sometimes a couple of my phones would get stuck at “Booting” after checkra1n’s KPF runs. I have yet to figure out what causes this, but if it happens, try again. Also, if the device hangs after bootx, try again. Finally, marking the compiled xnuspy_ctl code as executable on my iPhone X running iOS 13.3.1 is a bit spotty, but succeeds 100% of the time on my other phones. If you panic with a kernel instruction fetch abort when you execute your hook program, try again.

xnuspy will patch an enosys system call to point to xnuspy_ctl_tramp. This is a small trampoline which marks the compiled xnuspy_ctl code as executable and branches to it. You can find xnuspy_ctl‘s implementation at module/el1/xnuspy_ctl/xnuspy_ctl.c and examples in the example directory. That directory also contains xnuspy_ctl.h, a header which defines constants for xnuspy_ctl. It is meant to be included in all programs which call it.

You can use sysctlbyname to figure out which system call was patched:

This system call takes four arguments, flavor, arg1, arg2, and arg3. The flavor can either be XNUSPY_CHECK_IF_PATCHED, XNUSPY_INSTALL_HOOK, XNUSPY_REGISTER_DEATH_CALLBACK, XNUSPY_CALL_HOOKME, or XNUSPY_CACHE_READ. The meaning of the next three arguments depend on the flavor.

This exists so you can check if xnuspy_ctl is present. Invoking it with this flavor will cause it to return 999. The values of the other arguments are ignored.

I designed this flavor to match MSHookFunction‘s API. arg1 is the UNSLID address of the kernel function you wish to hook. If you supply a slid address, you will most likely panic. arg2 is a pointer to your ABI-compatible replacement function. arg3 is a pointer for xnuspy_ctl to copyout the address of a trampoline that represents the original kernel function. This can be NULL if you don’t intend to call the original.

This flavor allows you to register an optional “death callback”, a function xnuspy will call when your hook program exits. It gives you a chance to clean up anything you created from your kernel hooks. If you created any kernel threads, you would tell them to terminate in this function.

Your callback is not invoked asynchronously, so if you block, you’re preventing xnuspy’s garbage collection thread from executing.

arg1 is a pointer to your callback function. The values of the other arguments are ignored.

hookme is a small assembly stub which xnuspy exports through the xnuspy cache for you to hook. Invoking xnuspy_ctl with this flavor will cause hookme to get called, providing a way for you to easily gain kernel code execution without having to hook an actual kernel function.

There are no arguments for this flavor.

This flavor gives you a way to read from the xnuspy cache. It contains many useful things like kprintf, current_proc, kernel_thread_start, and the kernel slide so you don’t have to find them yourself. For a complete list of cache IDs, check out example/xnuspy_ctl.h.

arg1 is one of the cache IDs defined in xnuspy_ctl.h and arg2 is a pointer for xnuspy_ctl to copyout the address or value of what you requested.

errno also depends on the return value of vm_map_wire_external, mach_vm_map_external, copyin, copyout, and if applicable, the one-time initialization function. An errno of 10000 represents a kern_return_t value that I haven’t yet taken into account for (and a message is printed to the kernel log about it if you compiled with XNUSPY_DEBUG=1).

If this flavor returns an error, the target kernel function was not hooked. If you passed a non-NULL pointer for arg3, it may or may not have been initialized. It’s unsafe to use if it was.

If this flavor returns an error, your death callback was not registered.

If this flavor returns an error, hookme was not called.

If this flavor returns an error, the pointer you passed for arg2 was not initialized.

While writing replacement functions, it was easy to forget that I was writing kernel code. Here’s a couple things to keep in mind when you’re writing hooks:

For some reason, logs from os_log_with_args don’t show up in the stream outputted from the command line tool oslog. Logs from kprintf don’t make it there either, but they can be seen with dmesg. However, dmesg isn’t a live feed, so I wrote klog, a tool which shows kprintf logs in real time. Find it in klog/. I strongly recommend using that instead of spamming dmesg for your kprintf messages.

Bugs are inevitable when writing code, so eventually you’re going to cause a kernel panic. A panic doesn’t necessarily mean there’s a bug with xnuspy, so before opening an issue, please make sure that you still panic when you do nothing but call the original function and return its value (if needed). If you still panic, then it’s likely an xnuspy bug (and please open an issue), but if not, there’s something wrong with your replacement.

Since xnuspy does not actually redirect execution to EL0 pages, debugging a panic isn’t as straightforward. Open up module/el1/xnuspy_ctl/xnuspy_ctl.c, and right before the only call to kwrite_instr in xnuspy_install_hook, add a call to IOSleep for a couple seconds. This is done to make sure there’s enough time before the device panics for logs to propagate. Re-compile xnuspy with XNUSPY_DEBUG=1 make -B and load the module again. After loading the module, if you haven’t already, compile klog from klog/. Upload it to your device and do stdbuf -o0 ./klog | grep shared_mapping_kva. Run your hook program again and watch for a line from klog that looks like this:

If you’re installing more than one hook, there will be more than one occurrence. In that case, dist and replacement will vary, but umh and kmh won’t. kmh points to the beginning of the kernel’s mapping of your program’s __TEXT segment. Throw your hook program into your favorite disassembler and rebase it so its Mach-O header is at the address of kmh. For IDA Pro, that’s Edit -> Segments -> Rebase program... with Image base bubbled. After your device panics and reboots again, if there are addresses which correspond to the kernel’s mapping of your replacement in the panic log, they will match up with the disassembly. If there are none, then you probably have some sort of subtle memory corruption inside your replacement.

xnuspy will manage this for you. Once a process exits, all the kernel hooks that were installed by that process are uninstalled within a second or so.

xnuspy uses X16 and X17 for its trampolines, so kernel functions which expect those to persist across function calls cannot be hooked (there aren’t many which expect this). If the function you want to hook begins with BL, and you intend to call the original, you can only do so if executing the original function does not modify X17.

xnuspy_ctl will perform one-time initialization the first time it is called after a fresh boot. This is the only part of xnuspy which is raceable since I can’t statically initialize the read/write lock I use. After the first call returns, any future calls are guarenteed to be thread-safe.

This is simplified, but it captures the main idea well. A function hook in xnuspy is a structure that resides on writeable, executable kernel memory. In most cases, this is memory returned by alloc_static inside of pongoOS. It can be boiled down to this:

Before a function is hooked, xnuspy creates a shared user-kernel mapping of the calling processes’ __TEXT and __DATA segments (as well as any segment in between those, if any). __TEXT is shared so you can call other functions from your hooks. __DATA is shared so changes to global variables are seen by both EL1 and EL0. This is done only once per process.

Finally, the shared mapping is marked as executable* and a unconditional immediate branch (B) is assembled. It directs execution to the start of tramp, and is what replaces the first instruction of the now-hooked kernel function. Unfortunately, this limits us from branching to hook structures more than 128 MB away from a given kernel function. xnuspy does check for this scenario before booting and falls back to unused code already in the kernelcache for the hook structures to reside on instead if it finds that this could happen.

*not exactly what happens, what actually happens produces that effect

This module completely neuters KTRR/AMCC lockdown and KPP. I don’t recommend using this on a daily driver.

I do my best to make sure the patchfinders work, so if something isn’t working please open an issue.