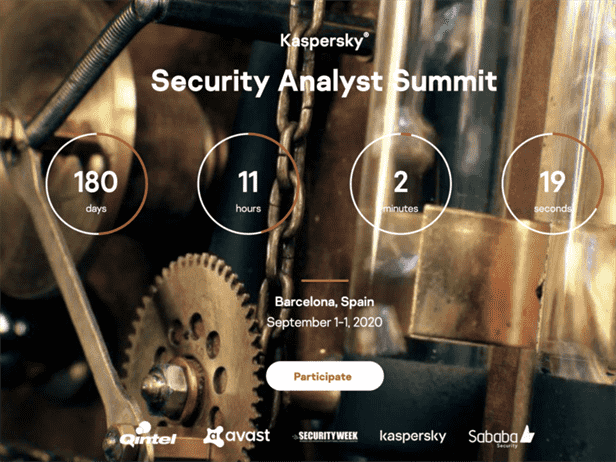 Kaspersky’s Security Analyst Summit (SAS) has been postponed due to fears surrounding the novel coronavirus outbreak.

SAS2020 was due to open in 32 days, with attendees hitting the streets of Barcelona from April 6 – 9. The conference caters to thousands of security professionals, researchers, and members of both government agencies and law enforcement. There are talks revolving around new research and cybersecurity trends, cybersecurity roundtable discussions, and workshops.

Several weeks ago, ZDNet asked Kaspersky if there were any plans to cancel or postpone the summit due to the cancellation of GSMA’s Mobile World Congress (MWC) — also intended to take place in Barcelona — due to novel coronavirus concerns.

At the time, the cybersecurity firm said there were “no plans” to cancel SAS, but Kaspersky was “closely monitoring the situation.”

Now, it seems the decision has been made to postpone — not cancel — SAS for the “health and safety of all stakeholders.”

The reason given for the postponement resonates as a past attendee of SAS for some years.

“We realized it won’t be “a real SAS” if we can’t share hugs, handshakes and beer glasses,” the company says. “We will do it properly when the time is right and everyone feels safe and comfortable.”

Kaspersky intends to go ahead with SAS during the September – November timeframe, but the cybersecurity firm has yet to decide on actual dates or places. For now, the SAS website has a placeholder date of September 1-1, Barcelona.

Refund requests will be honored but Kaspersky added on a Twitter thread announcing the decision that “we would prefer if you keep your ticket and use it later this year :).”

Kaspersky’s Security Analyst Summit is the latest tech event to be impacted by the novel coronavirus outbreak.

Also known as COVID-19, the respiratory illness has been confirmed in over 92,000 cases at the time of writing, claiming the lives of 3,200 people. The World Health Organization (WHO) recently said that the fatality rate of COVID-19 is 3.4%, higher than the seasonal flu, but is an illness that is not as easily transmitted.

As travel bans surface, companies restrict international air travel, and large, public gatherings are scrapped on the side of caution, events are being canceled, postponed, or switched over to virtual, remote options instead.

TechRepublic: Almost half of mobile malware are hidden apps

ZDNet’s Bill Detwiler has compiled a list of all the technology events facing disruption or cancellation due to COVD-19, which can be accessed here. Prominent events include Adobe Summit, Facebook F8, Microsoft MVP Global Summit, Nvidia GTC, and TNW.

On Tuesday, Google I/O, the tech giant’s annual developer conference, was canceled. The event, due to take place at Shoreline Amphitheatre in Mountain View, California, will be replaced with a virtual option. Ticket holders will be refunded.