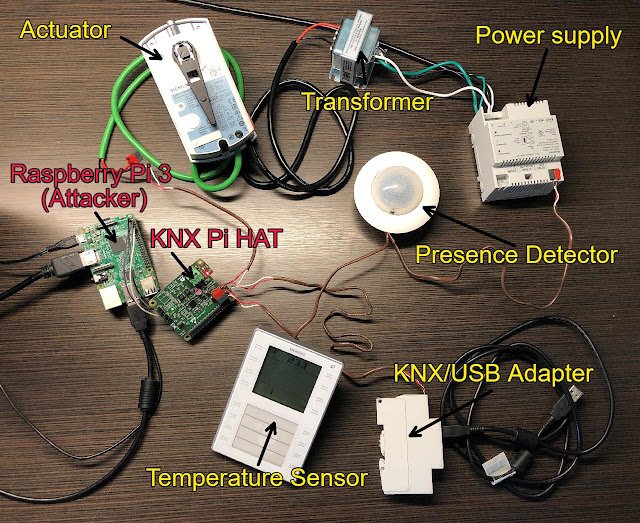 KNX is a popular building automation protocol and is used to interconnect sensors, actuators and other components of a smart building together. Our KNX Bus Dump tool uses the Calimero java library, which we contributed to for the sake of this tool, to record the telegrams sent over a KNX bus. Particularly, our tool accesses the KNX bus through a TPUART connection but can be changed to use different connection mediums. The telegrams are dumped into a Wireshark-compatible hex dump file. Timestamps are provided and normalized to UTC time with nanosecond precision to perform data analysis and provide a timeline of the telegrams. The hex dump file can be imported into Wireshark, which can be configured to dissect the KNX telegrams with Wireshark’s cEMI dissector.

This tool is designed to work with the Calimero Java library and is compatible with a Raspberry Pi 3 or 4 and a Raspberry Pi HAT for the TPUART connection.

Here are some guides to getting the environment setup:

Note: The next steps will assume that you setup your environment according to these guides.

In Wireshark, you have the ability to import packets from a hex dump and specify a dissector to analyze the packet.

Note: The time that is highlighted is the NORMALIZED UTC TIME. No matter what the timezone next to the time says, it will ALWAYS be the right time in UTC. 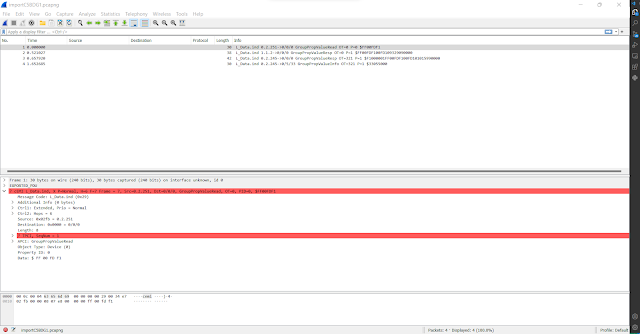 These are some common errors that can occur when running this program with this setup guide. I have provided solutions in hopes that it fixes the error.

Running Discover KNX Servers program instead of the Bus Dump

Make sure that you type in all the commands exactly. Running the command with “Dmainclass” will cause the program to default to the Discover KNX Servers program. Make sure it’s “DmainClass”

Cannot get the initial state of the TPUART port

Make sure that KNXD (if you have it installed per these guides) is not running. If following this guide, then KNXD will be using that same port and only one process can use the serial port at a time.

If you copy and pasted the contents of the hex dump files from above, you could be missing an extra new line character. For example, in “SampleData1.txt”, the github representation shows 4 lines of data when in reality it is 4 lines of data plus a newline character. So one possible option is to simply press “Enter” after the last byte of data in the file you’re importing.

In this repository, I have provided the sample file data in Sample-KNXBusDump-Telegrams.txt that was used to create the screenshots. Feel free to import this into Wireshark to test it yourself.

The tool was tested on this local KNX Testbed.