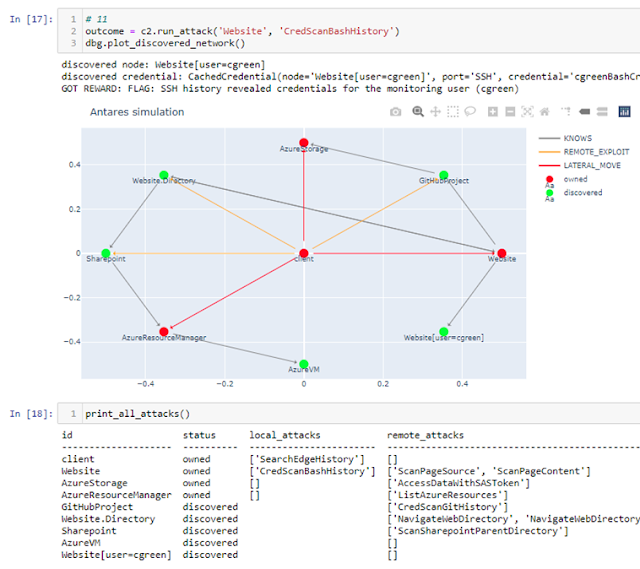 The simulation environment is parameterized by a fixed network topology and a set of vulnerabilities that agents can utilize to move laterally in the network. The goal of the attacker is to take ownership of a portion of the network by exploiting vulnerabilities that are planted in the computer nodes. While the attacker attempts to spread throughout the network, a defender agent watches the network activity and tries to detect any attack taking place and mitigate the impact on the system by evicting the attacker. We provide a basic stochastic defender that detects and mitigates ongoing attacks based on pre-defined probabilities of success. We implement mitigation by re-imaging the infected nodes, a process abstractly modeled as an operation spanning over multiple simulation steps.

To compare the performance of the agents we look at two metrics: the number of simulation steps taken to attain their goal and the cumulative rewards over simulation steps across training epochs.

We view this project as an experimentation platform to conduct research on the interaction of automated agents in abstract simulated network environments. By open sourcing it we hope to encourage the research community to investigate how cyber-agents interact and evolve in such network environments.

The simulation we provide is admittedly simplistic, but this has advantages. Its highly abstract nature prohibits direct application to real-world systems thus providing a safeguard against potential nefarious use of automated agents trained with it. At the same time, its simplicity allows us to focus on specific security aspects we aim to study and quickly experiment with recent machine learning and AI algorithms.

For instance, the current implementation focuses on the lateral movement cyber-attacks techniques, with the hope of understanding how network topology and configuration affects them. With this goal in mind, we felt that modeling actual network traffic was not necessary. This is just one example of a significant limitation in our system that future contributions might want to address.

On the algorithmic side, we provide some basic agents as starting points, but we would be curious to find out how state-of-the art reinforcement learning algorithms compare to them. We found that the large action space intrinsic to any computer system is a particular challenge for Reinforcement Learning, in contrast to other applications such as video games or robot control. Training agents that can store and retrieve credentials is another challenge faced when applying RL techniques where agents typically do not feature internal memory. These are other areas of research where the simulation could be used for benchmarking purposes.

Other areas of interest include the responsible and ethical use of autonomous cyber-security systems: How to design an enterprise network that gives an intrinsic advantage to defender agents? How to conduct safe research aimed at defending enterprises against autonomous cyber-attacks while preventing nefarious use of such technology?

Read the Quick introduction to the project.

Setting up a dev environment

It is strongly recommended to work under a Linux environment, either directly or via WSL on Windows. Running Python on Windows directly should work but is not supported anymore.

Start by checking out the repository:

On Linux or WSL

The instructions were tested on a Linux Ubuntu distribution (both native and via WSL). Run the following command to set-up your dev environment and install all the required dependencies (apt and pip packages):

The script installs python3.8 if not present. If you are running a version of Ubuntu older than 20 it will automatically add an additional apt repository to install python3.8.

The script will create a virtual Python environment under a venv subdirectory, you can then run Python with venv/bin/python.

Note: If you prefer Python from a global installation instead of a virtual environment then you can skip the creation of the virtual envrionment by running the script with ./init.sh -n. This will instead install all the Python packages on a system-wide installation of Python 3.8.

The supported dev environment on Windows is via WSL. You first need to install an Ubuntu WSL distribution on your Windows machine, and then proceed with the Linux instructions (next section).

To authenticate with Git you can either use SSH-based authentication, or alternatively use the credential-helper trick to automatically generate a PAT token. The latter can be done by running the following commmand under WSL (more info here):

To run your environment within a docker container, we recommend running docker via Windows Subsystem on Linux (WSL) using the following instructions: Installing Docker on Windows under WSL).

This method is not maintained anymore, please prefer instead running under a WSL subsystem Linux environment. But if you insist you want to start by installing Python 3.8 then in a Powershell prompt run the ./init.ps1 script.

The quickest method to get up and running is via the Docker container.

NOTE: For licensing reasons, we do not publicly redistribute any build artifact. In particular the docker registry spinshot.azurecr.io referred to in the commands below is kept private to the project maintainers only.

As a workaround, you can recreate the docker image yourself using the provided Dockerfile, publish the resulting image to your own docker registry and replace the registry name in the commands below.

Run the following command to run a simulation with a baseline RL agent:

If everything is setup correctly you should get an output that looks like this:

To quickly get familiar with the project you can open one the the provided Juptyer notebooks to play interactively with the gym environments. Just start jupyter with jupyter notebook, or venv/bin/jupyter notebook if you are using a virtual environment setup.

The following .py notebooks are best viewed in VSCode or in Jupyter with the Jupytext extension and can easily be converted to .ipynb format if needed:

How to instantiate the Gym environments?

The following code shows how to create an instance of the the OpenAI Gym environment CyberBattleChain-v0, an environment based on a chain-like network structure, with 10 nodes (size=10) where the agent’s goal is to either gain full ownership of the network (own_atleast_percent=1.0) or break the 80% network availability SLA (maintain_sla=0.80), while the netowrk is being monitored and protected by basic probalistically-modelled defender (defender_agent=ScanAndReimageCompromisedMachines):

To try other network topologies, take example on chainpattern.py to define your own set of machines and vulnerabilities, then add an entry in the module initializer to declare and register the Gym environment.

This project welcomes contributions and suggestions. Most contributions require you to agree to a Contributor License Agreement (CLA) declaring that you have the right to, and actually do, grant us the rights to use your contribution. For details, visit https://cla.opensource.microsoft.com.

When you submit a pull request, a CLA bot will automatically determine whether you need to provide a CLA and decorate the PR appropriately (e.g., status check, comment). Simply follow the instructions provided by the bot. You will only need to do this once across all repos using our CLA.

This project has adopted the Microsoft Open Source Code of Conduct. For more information see the Code of Conduct FAQ or contact [email protected] with any additional questions or comments.

Here are some ideas on how to contribute: enhance the simulation (event-based, refined the simulation, …), train an RL algorithm on the existing simulation, implement benchmark to evaluate and compare novelty of agents, add more network generative modes to train RL-agent on, contribute to the doc, fix bugs.

This project does not include any customer data. The provided models and network topologies are purely fictitious. Users of the provided code provide all the input to the simulation and must have the necessary permissions to use any provided data.